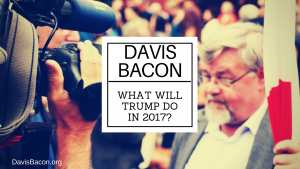 During his campaign, one of Trump’s many promises was an estimated $1trillion infrastructure plan. Announced several times during the campaign as a way to stimulate job growth in America.

It has been nearly three weeks since the New York Times interview and an announcement is still yet to be made. Many are wondering will Trump lean far right with Republicans that have been trying to dismantle Davis-Bacon for years, or will he work with the unions and Democrats to help gain their support for his infrastructure plan?

For many years, Republicans have introduced various bills, the latest being the TIRE Act, to try and repeal Davis-Bacon.(The Davis-Bacon Act is a law that states workers performing duties on federally funded construction projects must be paid a prevailing wage.) In the past these bills have consistently lost steam or were voted down. The potential to repeal the Davis Bacon Act is now back in the spotlight especially since the promise of an announcement, and some feel it may be Trump’s next move to further deregulate the federal government.

There are some who are very positive and feel Davis-Bacon is here to stay given the president’s previous meetings with union leaders. It would be smart for the president to keep things just the way they are with Davis-Bacon to keep the support of historically pro-DBA Democrats to back the infrastructure plan and to the success of the infrastructure project being done well. Still some predict Trump may have no other option than repealing Davis-Bacon if he wants to keep a spending conscience GOP on his side. A suspension of the Davis-Bacon Act is another possibility that many awaiting the announcement have been predicting. A suspension on Davis-Bacon has been enacted four times in the law’s history by previous Presidents George W. Bush in 2005, George H.W. Bush in 1992, Nixon in 1971 and Roosevelt in 1934.

There are theories of what is to come for Davis-Bacon on both sides bound to stir things up either way. Only time will tell as federal contractors, union leaders, skilled labor workers, and others await the President’s announcement on the Davis-Bacon Act and the new infrastructure plan.

For more information on all things relating to Davis-Bacon and Davis-Bacon Pension Plans please browse our website or contact us anytime.