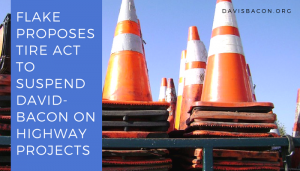 Earlier this year in January Senator Jeff Flake of Arizona proposed the Transportation Investment Recalibration to Equality (TIRE) Act. The Act proposal comes on the heels of Trump’s plan to spend around $1 trillion dollars to improve roads, bridges, highways, railways and more across the country.

The TIRE Act of course was met with much skepticism from The Construction Employers of America and many unions including the Teamsters, one of the largest unions in the country.

Without Davis-bacon in place more construction workers could end up in poverty situations and needing assistance just to make ends meet at home. They will also no longer have access to critical health insurance and retirement benefits under Davis-Bacon, putting more strain on other government programs including Medicaid and Social Security. The government will not be saving any money on the actual cost of construction either.

Prevailing wage laws have been proven to help keep the procurement of private companies for these jobs on an ethical playing field. They discourage construction companies from submitting ultra low bids just to win a job at the expense of cutting wages and hiring a low quality workforce. Low bids are known for frequently leading to claims, disputes, and project delays ending in the project costing more money than if the government had hired a reputable company that honors and values Davis-Bacon.

Prevailing wages also allow for payment of high quality workers. The more skilled and knowledgeable the workers are the safer and better quality result comes out in the end result on the project. This is critical for every construction project especially for the safety of our countries highways.

Some union officials say it is a “bait and switch” to put money and profits in the hands of the private companies that support these government officials.

For more information on Davis-Bacon and Davis-Bacon pension plans please browse our website or contact us anytime.