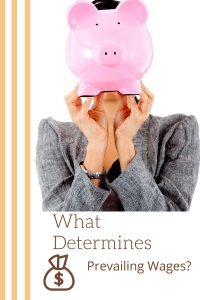 When construction, alteration, repair, or improvement work is performed on government property the laborers performing that work must be paid a prevailing wage as stated in laws to protect workers and ensure the best quality of work is being performed.

Prevailing wage is simply an hourly wage, benefits, and overtime pay that is due to anyone working on the project. The amount of each wage for different workers is determined by the Department of Labor and Industries according to local wage rates in the largest city of the county in which the work is being performed. Wages are determined separately for each county in every state.

The Depart of Labor and Industries begins their wage determining process with surveys and collective bargaining agreements. Trades are generally surveyed every three years to determine what current rates should be. Contractors and unions are surveyed to discover what wages are being paid for each job classification. Prevailing Wage rates are then calculated and set for each job classification by the survey results.

Here is the method for calculating the prevailing wage after the survey data comes back to the Department of Labor:

-Majority Wage of Largest City in the County: if more than half of the hours reported in the largest city of a county are paid at one wage rate then this majority wage rate will become the new prevailing wage rate for that county.

-County Average: a county average is used when there is no data for the county’s largest city. The data is then complied from cities county wide.

Prevailing Wage rates are published the first business day of August and February of each year and take effect 30 days after their publishing. These publications are important to adjust rates according to survey results and changes to local minimum wage rates as well as changes to rates based on the Union majority.

Prevailing Wages must be paid to every worker on government projects where the total cost of work is larger than $2,500. Jobs completed for under this amount must pay workers no less than the current minimum wage for the local area in which work is completed.

For more information about all things related to Davis Bacon please feel free to browse our website or contact us at anytime.