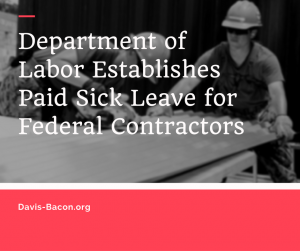 On the last day of September, the United States Department of Labor issued and released the Final Rule Establishing Paid Sick Leave for Federal Contractors. This rule requires some contractors and subcontractors on federal jobs to provide up to seven days of paid sick leave for certain employees. This final rule explains the details of implementing Executive Order 13706 issued by the president on September 7 of last year.

-Contracts pertaining to federal property or lands that offer services for federal employees, their dependents, or the general public

Sub-contracts under covered contracts are also subject to the rule and requirements of paid sick leave.

Not Included in Coverage Under the New Executive Order and Final Rule:

-Construction not subject to Davis-bacon

-Contracts for services not subject to Service Contract Act

There is a delay to the rule for employees whose work is under a collective bargaining agreement that was in place before September 30, 2016, and the employee is given at least 56 hours of paid sick time. The rule will not apply until the CBA terminates or January 1,2020.

Employees Covered Under the Rule

Covered employees include anyone who works under or is performing work connected to covered contracts and their wages are set by Davis-Bacon, the Service Contract Act, or the Fair Labor Standards Act. A person performing duties in connection with covered contracts is only covered if they perform 20 percent or more of their hours on that particular work in a given workweek. It is the duty of an employer to keep track of these hours.

Paid leave must also be offered to part-time employees and some independent contractors.

Every worker will accrue one hour of paid leave for every 30 hours worked under contract or in connection with contracted work up to 56 hours in a year.

Record keeping requirements require that employers keep track of each employee’s paid sick time earned each pay period or monthly whichever is shorter. Instead of having employees accrue these hours an employer can provide a front-loaded lump sum of 56 hours at the beginning of each year.

An employee may use paid sick leave for:

Employers need to provide compensation for paid sick leave no later than one pay period following the sick leave was taken.

A doctor’s note or other supporting documentation to prove sick leave was properly used will only be required if the employee was gone for three or more consecutive full work days.

Employers will not be required to pay out accrued but unused sick time earned by the employee if the employee moves on, but the sick leave needs to be re-instated if that same employee is rehired within 12 months unless the leave was paid upon the employee leaving.

If leave is foreseeable a request must be made by the employee seven days in advance.

For more information regarding this new Final rule or any other information related to the Davis- Bacon Act and Davis-Bacon Pension Plans please browse our website or contact us anytime.