Davis-Bacon Facts that are Important for Every Contractor to Know 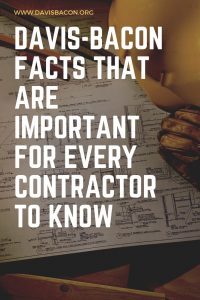 With all of the misinformation, we thought we would put together a few basic facts about Davis Bacon to help take the doubt out of Davis Bacon and encourage more companies to bid on jobs that will boost their business.

Davis-Bacon Wages are set at the Federal Level and Applied Locally.

There are many different prevailing wage requirements and laws coming from federal, state, and local laws, but a majority of federal projects are governed by the Davis-Bacon Act.

What is the Davis-Bacon Act

Davis Bacon was made into law in 1931. It requires contractors and subcontractors performing work on federally funded jobs to pay all laborers wages and benefits at the prevailing wage rate for that area. Under Davis Bacon, these wages can be paid in a combination of cash and fringe benefits.

Davis Bacon applies to contracts over $2000 in which the federal U.S. government or District of Columbia is the customer. Jobs include construction, alteration or repair of public buildings, and public works. The prevailing wage scale for the job being done is required to be openly posted for workers at the site of work by the contractor or subcontractor.

What is Davis Bacon Wages?

The Secretary of Labor determines the prevailing wage for each class of laborers and mechanics employed on projects of a character similar to the contracted work in that local area. The set wages are posted on the federal site at wdol.gov as well as Service Contractor Act wage determinations. In addition to these requirements, individual states and local cities may have their own wage requirements and these should be researched as well.

The Department of Labor has regional offices that send out a Form WD-10. It is used to conduct a wage determination survey for each state over a three year period. The completed surveys returned from local construction companies provide the primary wage determination information. It is important to respond to these surveys because with too few responses the DOL may resort to using info from certified payrolls from area projects for wage determination. Fair prevailing wage determinations rely greatly on completed WD-10 forms.

The Davis-Bacon Act requires that prevailing wages are paid to “all mechanics and laborers employed on the site of work.”

Who are these employees? The Code of Federal Regulations states a laborer or mechanic “includes at least those workers whose duties are manual or physical in nature….as distinguished from mental or managerial.” This is not limited to specific trades and can also include apprentices, trainees, and helpers in certain conditions. It can also include the foreman if more than 20% of their work is manual labor.

What is the site of Work? The site of work is explained as “the physical place or places where the building or work called for in the contract will remain.” This can also include other sites where work was performed to fulfill the contract. For example: tool yards or prefabrication plants used only to perform work for the specific job; it does not include these places if they are used by a contractor to perform work for other jobs.

When working on a Davis-Bacon job there will be many questions and trying to find answers can feel overwhelming. The good news is there is plenty of help out there for companies working on Davis-Bacon jobs. There is a ton of information at a contractor’s fingertips on the federal government website as well as companies that work with Davis-Bacon to help answer questions.

If you need more information on performing work on Davis-Bacon jobs and Davis-Bacon pension plans we are happy to help. Contact us anytime or browse our website to learn more.