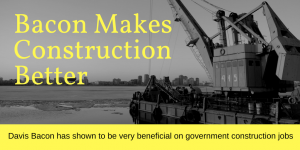 In recent years past, there has been some controversy over Davis Bacon prevailing wage laws and whether they are outdated and should be dissolved. Some believe Davis Bacon is too expensive and no longer relevant in today’s workforce.

To the contrary of these beliefs, Davis Bacon has shown to be very beneficial on government construction jobs. One unexpected benefit is the empowerment of careers for disadvantaged workers. With wage and worker data recording requirements in a digital age, local communities can take advantage of the information to ensure hiring programs are more successful and it is transforming the workforce.

Not only are wages being tracked, but the skill level, ethnicity and other factors of employees can be recorded and tracked. City governments and other public agencies are able to attach hiring goals to public works projects encouraging contractors to hire workers from struggling backgrounds.

The recording practices required on Davis Bacon jobs has allowed for increased visibility and helps companies to gain insight into how hiring disadvantaged workers has helped to transform local economies.

The reason Davis Bacon exists and was formulated in 1931, is to protect both the workers on federal construction jobs and the tax payers funding the jobs from greed-driven contracting companies. There are thirty states with their own specific prevailing wage laws as well to help solidify and back up the intentions of Davis Bacon. With Davis Bacon in place contractors can no longer try to win out a bid simply by putting in the lowest price with intentions to cut corners on fair employment practices and a properly trained workforce.

The attacks on Davis Bacon and attempts to repeal it will only bring harm and higher expenses to federal contract projects. Statistics show the average budget for these jobs consist of 23 percent labor costs and 77 percent material costs. Though the wages paid to workers may be higher they help to retain skilled workers that know how to perform the tasks they are given and get them done to safety codes and standards correctly. Statistics also have shown that jobs with prevailing wage skilled workers are completed 20 percent faster.

Cutting Davis Bacon would also cause a big dent in incoming taxes. Companies who do not pay a prevailing wage to workers will not be paying as much in taxes and this could be a loss to the tune of about $5.3 billion in federal tax revenue.

Davis Bacon isn’t hurting the economy; it is, in fact, helping it. Paying a prevailing wage to skilled employees working on federal jobs is only a small chunk of the costs for a federal project.

For more information on Davis Bacon and Davis Bacon pension plans please feel free to browse our website or contact us anytime.