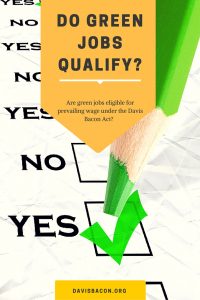 In the last few years green jobs have been on the rise. Even the government has been trying to get involved with stimulus funds to encourage the building of a green economy across America.

So what exactly is a green job and are they eligible for prevailing wage under the Davis Bacon Act?

Around 3.4 million jobs in the country qualified to be titled as a “green” job in 2011 according to results from a report compiled by the Federal Bureau of Labor Statistics. Since then green jobs have been growing but they still account for just a small percentage of all jobs in the economy.

The description of a green job is any job that is part of offering environmentally friendly goods and services. On average green jobs pay less than their conventional equivalents . Of course certain fields of green jobs do pay more than conventional jobs in the same field. These include jobs in the engineering, architecture, financial, alternative energy, and construction. Construction is probably the fastest growing area of green jobs currently. The demand for LEED certified buildings and Eco-friendly green built homes has quickly grown all over the country in the last few years.

So what about green jobs that are federally funded? How much do they pay and are they included in the Davis Bacon Act?

The answer is it depends on how the job is federally funded. If a company is merely receiving funds from the government because they produce a green product they are not bound by Davis Bacon. The government is still trying to iron out if these companies should be held to wage regulations as the industry is still very young. A company in Michigan was discovered for not paying prevailing wage to their workers while receiving stimulus finds from the government and they won the fight on paying their workers under prevailing wage.

There are however green jobs that do fall under the protection of Davis Bacon. These are jobs that are federally-assisted or federal construction projects. It does not matter if a job is conventional or green the job will still be paid at prevailing wage. The District of Columbia (Washington D.C.) currently has the largest amount of green jobs and certain job descriptions on federal jobs are paid at prevailing wage.

For more information about Davis Bacon please feel free to browse our website or contact us at anytime.